Ps-- It's a hubby sick day again... you know what that means!  Yep, curled up in bed watching movies all day again... the man-sick day is the only time I wish I was the husband.  : )
1 comment:

With an attempt at honesty in all runs-- I totally had a freak out moment on my 4 mile run this morning... About half way through my run I started having chest pains-- the location was right over my heart.  It was not a cold morning (50 degrees) and I don't think we started too fast (but my stepdad's watch is dead).

It totally freaked me out and I said I needed to walk as soon as it hit-- then tried to run again-- the pain returned-- and I started to cry.  In the dark.  On the run-turned-walk.  And I tried to conceal the sniffles from my stepdad.  I was freaked out and I absolutely HATE having to walk once we get going.

I'm not sure what happened and anyone can offer up any "medical" information.  The only other time I have that happen is when its been super cold and I am breathing in cold air-- or if we start too fast (I have exercise induced asthma).  So yeah.  Not sure what happened.  I'm hoping we were just going faster than we thought and the 'ol ticker is still in good shape.

So-- not every run is a rock star run... even when you feel like your getting faster and runs are getting easier, you can have a dud thrown in there to humble you!
1 comment:

I guess I can't stop with the music, themed blog titles.  : )

If/when we're blessed with another pregnancy and it goes anything like it did with the little man, here are ways I may know I am pregnant, just for fun...  humor me...

1.  I will crave cheese burgers -- ugh.  Yeah, when I was newly preggers with my little guy all I wanted was a cheeseburger.  (And this is coming from a person who doesn't eat much meat, especially red meat.  And it had to be real burgers-- none of the turkey burger fake stuff I eat at other times!)

2.  I'll have ALL. DAY. ICKY's.  During weeks 6-14 I wondered why in the world anyone would ever want to procreate as I felt like vomiting 24-7.  And when I wasn't actually hurling or dry heaving, I felt super hungry but NOTHING seemed stomach-able at all.  Hubby had to cook his own meals in these weeks because even walking in the kitchen made me feel extra sick.

3.  I will be tired by 7pm.  I remember that being a biggie in my early pregnancy... I just wanted to crawl in bed as soon as I came home from work and had grabbed dinner.  Couple that with the icky's and being asleep was the only chance for sweet relief.

4.  And now for a more positive symptom...  I'll have the most even temperament and hormones.  Seriously, during the 9 months I was prego, I was in emotional bliss and such even-ness.  (My hubby may disagree but I felt that way).   I seriously felt the most balanced emotionally of any time in my life.  Sure I still had some stress/cry moments but all in all, I think I was more normal than my usual.

5.  I will have an awful metal kind of taste in my mouth and be extra slobbery.  Maybe this one is just me but along with all the extra saliva, I had the worst taste in my mouth in those same weeks of 6-14. Coupled with not being able to stomach drinking water for 7ish weeks it was a bad combination!

And finally... last but not least, I will know I am prego with...

6.  A sore chest.  That was my VERY first sign with little man, even before I saw 2 lines on the pee stick, I thought something might be up because the ladies were soooo sore while taking a shower.


Ok, your turn... how did you know you were pregnant?  If you've been pregnant more than once, were they the same or should I expect something totally different next time?
1 comment:

Skipping Runs and a LA Update

I almost never skip a run-- but my step dad called last night and mentioned it would be cold and rainy at 6am this morning and asked my thoughts.  Yuck, I said-- I don't know-- what do you want to do?  We kind of mutually decided to skip.  That means I supposed to have a date with a Jillian video but it's coming up on 5pm and I haven;t yet.  And I already took a shower and dried my hair-- that always makes my follow-through chances go down.  : )

Hopefully I'll be writing tomorrow that I did a video anyway.

So in project pitching to LA execs news-- the execs at the first level "love the story and the build.  Now we wait for the network executives... it is a process."  So-- that's all I have to report.  If nothing else, lots of spiffy producer-ish people have now seen one of my projects, company, etc.  I'm still thinking its cool no matter what happens!

Too much time has passed since writing.

When I was little my mom and stepdad used to play the song Time Passages by Al Stewart on repeat.  Hence the title,  my absence reminded me of that super cheesy song today.  I digress.

So one reason I have not written as much is because my 19 year old brother called me 2 weeks ago crying and asked if I would pick him up.  I won;t go into his whole background story as it's not appropriate for the world-wide-web... but I said he could stay with us one night and we'd see after that.  Since then he's done well and he's still been with us and is working toward his GED which he takes next Monday/Tuesday and got a part time job, AND has been sober for that length of time as well.  He also is working towards starting at a community college in the fall.  We're not so niave to think this is a permanent situation but we're hoping to get him back on two feet with the proper "education" to get back out there.

I also wouldn't do this if I had an older child.  But right now my son is cool with an extra dude around the house and my brother does well with him.

So that's one excuse for you.

The next is somewhat related... I have been SUPER busy with archi projects.  But the most exciting news is that one of my projects is actually being pitched for an episode on a new A&E show called "Grand Designs"?!  I'm not getting my hopes up that anything will happen and honestly the project is not one I'd like to represent me to America but it may make for good tv.  I have a client who wants their project to look like a barn.  You read that right.

So in a crazy turn of events I have an LA producer call me last week (not sure how they got my info?!) and asked if I had a project for this new show they wanted to start as they were hoping to feature our region on an episode.  I said no but later thought about telling her of this other project.  She loved the story of the clients (they are a super great Christian non-profit) and what they do at the camp I am working on the building for.  So-- all that to say, there have been lots of calls and interviews and headshots sent to LA and today is the day we may find out if it makes it to the next level or dies on the pitch-table.  I'm fine either way because it's been pretty fun so far.

No pictures today-- and I have a kiddo calling... Until next time.
2 comments:

Foods You Should Never Eat

I really try to watch what I put in kiddo's body and my own.  Trying to buy organic and eat whole foods and other things I won't bother listing too... So when I read this article on 7 foods you should never eat I was pretty surprised that a couple of these items are ones I pick up -- specifically canned tomatoes (even though I often buy organic-- the combo of the can and acid is bad-- think BPA) and on lesser occasions microwave popcorn.  Ick.  They can also cause fertility issues and other icky things.  Take 2 minutes and read the article. It was one without some of the hype that is often found in these kinds of articles.
2 comments:

Dude, sorry for the sort of downer previous post.  I write those, hit publish, and wake up the next day going: "Ick.  Why you gots to be all Debbie Downer on people, and slam on their posts, yo?"

And I break into my country-girl-goes-gangsta talk.

It is a new year.  And I am hopeful.  I keep fingers crossed that 2012 may hold another pregnancy for me-- if it's God's will!  And if it doesn't-- I'm still going to keep having a smile on my face, and I'll still be running, at peace and joyful.  I have more blessings than I can list or count.

One being this silly toddler who has gotten some major attitude lately when not getting his way.  As in, high pitched scream kind of fit.  Whoa.  One moment he's laughing and giggling and acting silly and the next-- it's like his world is upside down because you asked him to go change his diaper or eat his breakfast.  Don't let anyone tell you a 16 month old (and even much younger) doesn't know what they want!

Oh-- any another major milestone to document.  "N.O."-- yep, Cubby knows that sweet word now and uses it.  The first actual use happened Tuesday morning when we had his BFF over (a boy 3 weeks older) who usually is the Alpha dog of their play time.  Except when the BFF tried to stand on the little wagon my guy was pulling-- my sweet Cub started yelling "No, no, no, no, no, NOOOOOO!"  Let's just say the other boy was off the wagon in a Hot Second!  That's my boy!  : ) 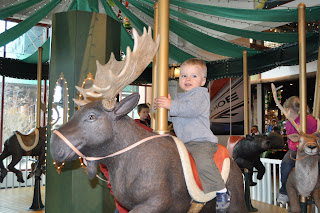 (Don't call CPS-- I am ducking back behind him holding on to him.)
1 comment:

Email ThisBlogThis!Share to TwitterShare to FacebookShare to Pinterest
Labels: 16 months old, debbie downer, learning the no word, no, Toddler, toddler and no, Toddler's Vocabulary

I don't know why I'm grumpy about certain things but add New Years Resolutions and Year in Review blog posts to my grumpy list.  No offense to anyone that did those but I skimmed, skipped or deleted any that I came across this December.  And I tried to avoid Facebook for a few days for the same reason.  Bah Hum Bug to me.

I've been knocking out runs though and keeping up a decent 6-8 mile base so that we can add in some long runs and stay fit for an April half marathon.

So my husband had this "Christmas outfit" that he and his sister both wore (back in the 70s ... before I was even a twinkle) and wanted a photo of the little guy in it.  Try not to laugh... : ) 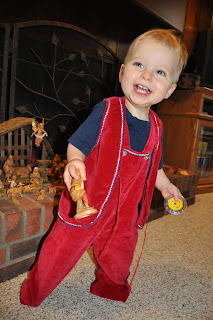