Quiet Kid = Something going on that shouldn't be

Oops.. this happened last month but never got posted...

Scene upon entering the room:  Find kiddo "coloring" the drawing I was working on drafting during his nap... I have to give him credit for coloring the circles.  : ) 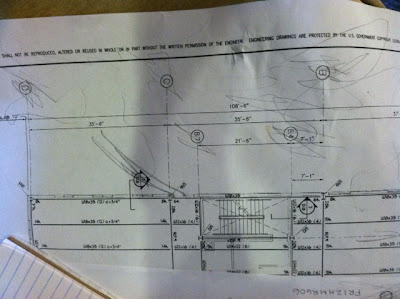 ... But that was followed by a timeout for touching a pen which he definitely is aware is against the rules based on the "busted" look on his face when I entered the room.

Future architect like his mom and paternal grandpa?  I hope not!!
No comments:

Wow my posts can ebb and flow!!

The fam went on a little getaway to the fine area around Nolin Lake in Kentucky.  Locals will best know this area for Mammoth Cave.  It was a COLD weekend but really, really beautiful weather! 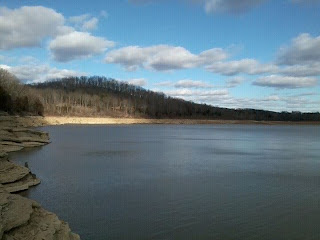 Pretty, Huh??
Our little guy had the pleasure of napping and night-ing in the Master bedroom with the fan on... that's what happens when you are away for a weekend with your crazy cousins and grandparents and aunt and uncles... you get the bathroom.
I also had one of the most interesting runs I've ever had and I know this is about to not do it justice.  So our cabin on Nolin Lake was pretty well in the middle of no-where.  We didn't really think about that when we had 6 miles on the calendar for the weekend's run.  My stepdad and brother-in-law decided to run.  We headed out knowing it would be pretty hilly (an understatement) and some back and forth to avoid narrow roads with fast cars.
About a mile into our run (all up hill, of course)... we reach a house with a pack of dogs who decided to run out and meet us.  I love dogs but I'm not sure if these country dogs are used to runners and are friendly.  Well they sniffed and barked a bit and then one of the black labs decided he wanted to run with us.  So he stayed with us and would scope out squirrels and creeks along the way or bark at other dogs as we ran.  I think I counted 2 dogs actually tied up in any way-- the other dozens of dogs and cats were loose.  I take it as good luck that we had out guard dog with us the whole way.  : )
Anyway, about mile 4, we added a beagle dog to the pack.  We must have looked hilarious to people passing by-- running with our 2 diverse dogs and RUNNING in an area that I'm pretty sure doesn't see runners.  It was fun!  It really passed the time and hills!
Hope everyone is doing well and having fun runs!
No comments:

Email ThisBlogThis!Share to TwitterShare to FacebookShare to Pinterest
Labels: 6 mile run, dog, dogs on the run, running and dogs

I have been writing this post in my head for a while.  I wish it wasn't coming after a short mention on the blog that I'm about to introduce but oh well... she beats me to the punch on most milestones anyway.  ; )

Many moons ago I started this blog because I knew I wanted to run during pregnancy and I could only find ONE blog that actually chronicled the running adventures of a pregnant Mama.  (I have since found and followed others that have done the same) but Nikki at Slow is the New Fast was the first and only I found when I was pregnant and running.  You may remember my first blog entry where I mention "this chic's blog in Canada".   : )

Well, I continued reading back from Nikki's first post and have followed her ever since, through a second pregnancy.  She now has 2 sweet boys and stayed active through 2 pregnancy's but that's not all-- Nikki had been in a MAJOR car wreck (which you can read in detail about on her blog).  Not only did she survive and make a major comeback, but she took up running, and then she continued running late into her first pregnancy.

Let's just say Nikki was a major inspiration and even though we have never met, I thought about her often when I wasn't sure I could run another mile in my "weird feelings during ballooning pregnancy" days.  And I thought about how she ran not just during pregnancy but after a bad accident and after major back issues/surgeries.  If she could do it until late pregnancy-- so could I.  And I did!

This inspiration of a Running Mama was one of the first people I ever shared this blog with-- as I kinda wanted it to be something people stumbled upon as I had stumbled upon her blog.  (Even now, almost none of my friends and family know about this blog... but I still hope my story reaches other Mama's worried about running when pregnant.)

Anyway, I am raising a toast to a gal who inspired my pregnancy runs and with my glass raised-- let's wish Nikki good luck in her forth and upcoming half-marathon!

Keep running-- you never know who is watching, reading or being inspired!
~R
3 comments:

An idea my sister saw to develop fine motor skills—inserting pipe cleaner into strainer holes… he was good! 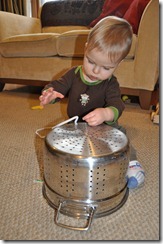 And took it very seriously… 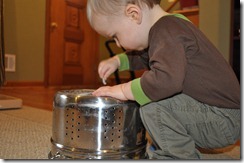 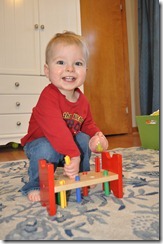 I could eat his toes on a daily basis if allowed… : ) 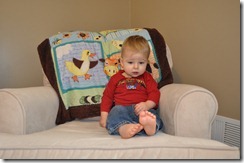 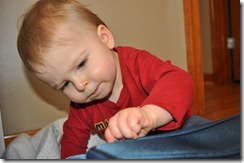 I love close ups… even with food on the face… 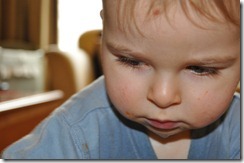 He is allowed to open one cabinet in the kitchen where we keep non-breakables.  This is how I found him the other night… 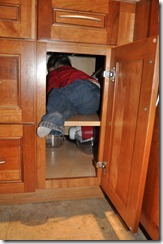 Early morning run was cancelled at the last minute by a sweet boy who decided to be (mostly) happily awake from about 1:30am to 5am this morning-- checked the diaper, temperature, etc and he was fine.   THat meant it Mama was unhappily awake during that time. He was playing, yelling "Mommy and Daddy", play-kicking the crib, talking... oh my!  It was a long night.

So I bailed on the early run and instead pushed the little guy for about 3 miles.  It was more of a workout to push him but less miles than the 4 I had planned if I ran early.  It felt really good and I was glad it was not a dud run again!  Yeah!!