Today is 37 weeks and I am honestly feeling really good!  I actually woke up this morning so comfortable I forgot I was pregnant.  Also, I think flipping over has actually gotten easier since I've gotten a little bigger!  Crazy, huh?!

Running has also gotten easier.  I have almost no weird after-effects now.  I know I am probably sounding like a major optimist, but its true-- and its not just pregnancy hormones!

I have been running about 2 miles each run (except weekends I may do 3 or so).

Because I was always curious for other runners, here are the latest stats from my appointment today.

I have gained a total of 24 pounds in this pregnancy.

Blood pressure has been great and low.

My mother-in-law got me/us the BOB ironman stroller-- I can't wait to give it a whirl!  Yeah!  If you have one, what do you think of yours?  Any tips for the initial newborn retrofit?

I leave you with some pics!  The first is me with the new stroller (taken last weekend) after hubby put the tires on in the living room-- I was thrilled!  The last is of the nursery which is finally ready for a baby!  (Yes, that is my bag of running gear in the bottom right corner, may need to find a new home soon!) 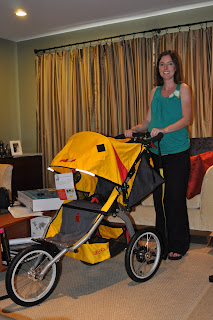 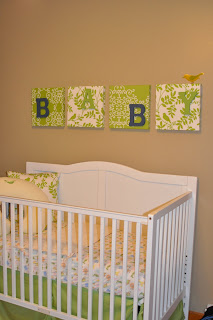 Today was a really fun run!!

I went out a little after 6am and it was crazy hot and muggy!  I started a bit slow getting in the groove.  Then, there were occasional bursts of rain showers (but with the big drops) as well as a little thunder and lightning.  Let me tell you-- that put a little more pep in my step.  About a mile+ into the run, I could tell I was going to get wet!  There was a good downpour for just a minute or so which let up.  But then, a bit further up it was a full on constant downpour!!

"This feels great!!" I thought to myself.  "How often do we get to play in the rain as a big kid?"

I sped up a little but enjoyed the full soak I was now running through!

I knew my hubby would start to worry though and sure enough I get a phone call** from him about this time asking where I was because he was out driving my usual course and didn't see me.  About the time he found me (I had mixed up my route for some variety), we were nearly home so I just finished running and I looked like a drowned pregnant rat!

It was one of the more fun runs I have had in a while!  I really need to play in warm summer rain more often!

**Side note:  Yes, I run with a cell phone these days.  I am nearly 36 weeks pregnant so you never know when you may need the phone!  I also run with pepper spray in the other hand!
No comments:

One month and Belly casting

We're down to about a month... give or take depending on when this kiddo decides to come into this world.  It's exciting!  I am actually starting to feel a little more ready each day and taking in all the good stuff until then.
Ever since I saw a belly cast (long before I was pregnant or even married) I decided that some day I wanted one.  It was the artistic side of me.  I was going to have the hubby attempt to cast me, but then we found this chick locally who is trying to grow her business and went with that.  So at 35 weeks, yesterday was the big casting day.  Below is a picture of the belly cast right after coming off my greased up body (along with the artist who cast me). 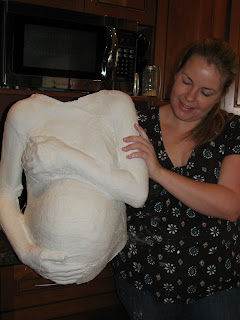 I decided to forgo modesty for the sake of art and wore nothing but some old shorts for her to cast me. I had to agree with my hubby that it would be good practice for birth because all kinds of people will be seeing me in naked glory.
So anyway-- the process for the casting is to strip down, rub Crisco all over your upper body that is being cast, and then begin applying the strips of wetted gauze that is impregnated with plaster.  It starts to harden pretty fast which also is a rather odd feeling, but a neat process.
From this "rough cast" she will sand and prime into a smooth final cast which can be painted and hung.  I am hoping to paint it a solid color and maybe add a verse to the belly-- but we'll see how it all turns out.
To look back at yourself (or hold yourself) in a plaster-cast-version afterwards is almost like an out-of-body experience! Dramatic statement, I know, but it is very crazy!!
So, that was my fun yesterday.
~Running for Two
No comments:

Email ThisBlogThis!Share to TwitterShare to FacebookShare to Pinterest
Labels: belly casting, one month

I know I have several quiet and lingering readers-- I'd like your voice and opinion on this one...
Should a pregnant mama be jumping during exercise?!

I have been doing some work out videos in the morning when it is raining or I am not feeling a run.  The hubby was concerned that so many of the moves involved jumping.  I have felt great after a workout and during BUT in doing a google today it seems many think you should not be jumping in the final weeks.

What are your thoughts or experiences???  This particular link really freaked me out about it!  But this one seemed to believe it was ok with a few conditions.  Leave a comment with your thoughts PLEASE!
No comments:

Email ThisBlogThis!Share to TwitterShare to FacebookShare to Pinterest
Labels: jumping during pregnancy

We are getting danerously close, people!  Wow.  Before I jump into running (yes still running).  Allow me to talk baby for a while.

Today, I am blessed to be celebrating 4 years of marriage to my first babe-- my wonderfully husband.  I seriously adore that guy!  Four years has flown by and I look forward to many, many more decades of celebration together!

I went to the doctor today-- imagine my surprise (and ok, excitement) that baby is growing but this mama was not!  I didn't gain anything since my last appointment (2 weeks ago)!  Yeah!  Also, my OB confirmed what my Chiropractor had been also feeling-- baby is head down, with the spine to my left and the feet/hands to my right.  (This confirms the kicks and random pain only under my right rib!)  I was pretty excited about the confirmation to help me better visualize this little kiddo in there.  Finally, in other stats the heartrate was in the 160's today.  Faster than last week even!

On to running-- I am really enjoying my morning runs once I am up and at 'em.  It feels much better early in the morning and its nice to be finished for the day in the afternoon.  I am crazy SLOW now but am happy to still be running and I have been focusing more on getting a certain time of running in (say 30 minutes) instead of a distance or pace.  That has also helped my sanity!

I find the old people I pass who are doing their walks around the same time, really stare these days.  I probably would too, as I don't think I have ever seen a very pregnant lady running.  I am sure it looks odd.  The good news is that it totally makes me giggle out loud and wonder what they are thinking!
2 comments:

Admission of Guilt-- I went there.  Yes I did.

Mentally I went to the thought of having a final run.  Running with my step dad this weekend, I thought-- 'what if this is our last run together until after I have the baby?'

And by that thought, I do not mean because the baby comes, or because I am too slow for him, but because I just decide its not worth it to continue running.

I felt ashamed I thought it.

But the thought lingered a little and then dissipated when I slept ok the night after and woke up feeling fine!  Today I did my bootcamp dvd instead of a run... but I still plan to keep running.  We're almost to 34 weeks.  Only 6 more weeks of running, I tell myself.  I have no good reason yet to stop running other than the after effects I have felt for months now.  My actual runs are still decent in length and a bit slower to accomodate, but otherwise they feel no different.

You WILL feel better for this once the little guy or gal gets here.


AND... not to make you totally envious but word on the street is that my Mother-in-Law has had a total splurge and bought me (us) the BOB ironman stroller with infant seat conversion I have been lusting after since I heard of it a few months ago from a Facebook friend. 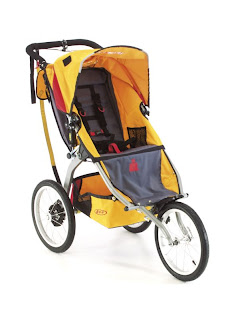 All the more reason to keep running right here.  I can't be the new mom with a toy like this and not be a committed runner.  Spending that level of pocket change and not running is not cool.
So, running for two, is this post enough of a pep talk to keep you going a few more weeks??
No comments:

Good news!  The OWW from the last post has been remedied thanks to my trust suppport band again!  I have been sleeping in it and keeping it on all day too.  I have to say its made a HUGE difference!  Even after my run, I didn't have the usual difficulties turning over in bed when wearing this belt, and it took away the horrible tender feeling in my belly button.  I keep it a little looser at night so that the baby will stay head down instead of feeling pushed on, but it still seems to be working for us both.

In other news... I think the heartburn may be starting!  I woke up with some heartburn last night so I just propped myself up a little better and have tried to keep my posture better when I have felt it coming on today.